It is reported that the Chinese smartphone makers Xiaomi and Real Mi are competing to beat each other in the market. Both manufacturers very quickly released their new smartphones last year.Keeping your phone up to date is very important, especially in a highly competitive market, where the middle class sees new smartphones every week. However, it looks like some brands have other plans. The Realme 5i, is a continuation of the company's existing 5 series.Realme 5i, this series includes Realme 5, Realme 5 Pro and Realme 5S. The latest smartphone in this lineup is the Realme 5s.The Realme 5i is no different from its predecessor.

It offers a quad camera setup (common across the lineup), the same 5,000mAh battery, Snapdragon 665 chipset, screen, 4GB of RAM, and more. The same 64GB of internal memory.The good looking smartphone on the market is the Realme 5i, the fourth model in the Realme 5 series and was the first model in Realme last year. This smartphone is similar to the updated Realme 5 and Realme 5s. This model will replace the Realme 5, reducing consumer confusion.

Do you really need Realme 5i? We are currently reviewing this model.Let's find out.

* The Realme 5i sports a Qualcomm Snapdragon 665 SoC

* It as a quad-camera setup at the back

Build and Design: Good looks despite the plastic back, camera protrusion is noticeable-

Earlier, it would seem like Realme liked to push the colour blue down our throats. Realme 5s got a unique red colour variant and now Realme 5i comes with Forest Green colour variant in addition to a blue variant. The good news is that it is scratch-resistant and you will not have to worry about the smudges. Realme hasn't bundled in a clear silicone case with this device.

The downside of the front panel design is that the rear camera has such a large vertical curvature that it is prone to scratches and dirt. Every time I use my phone, I worry about scratching the camera glass every time I use it. Fortunately, it didn't happen for almost 20 days using the phone, but in the long run it looks like it won't. This phone has a sleek design inspired by the sun. The company calls it Sunrise Design. This gives the phone an attractive look. This design is unique in that previous phones had a "crystal design".

One of the highlights here is that the Realme 5i has a plastic back, so it looks cheap but gets lighter (195g) despite its large 5000mAh battery. Personally, I don't care. You can also buy a rear-mounted fingerprint sensor. The front of the phone houses a 6.5-inch LCD with an 89% aspect ratio and a 1600 x 720 pixel resolution. The screen stretches almost from edge to edge, and there's water on top to accommodate the selfie camera.

On the right is the on / off button and on the left is the volume button. In addition, the Realme 5i has a speaker, a MicroUSB port and a 3.5mm headphone jack. It is a little tall when you hold the phone, but the light side is very comfortable as it is light and small.

Camera: Nothing to go gaga over but covers the basics-
The Realme 5i has a quad rear camera similar to the Realme 5. It has a 12MP main sensor, an 8MP wide-angle camera, a 2MP macro camera and a 2MP depth sensor. The main sensor has a pixel of 1.25 μm and an aperture of 1: 1.8. The wide-angle camera has an f / 2.25 aperture, while the macro and depth sensors have an f / 2.4 aperture. For selfies, this phone has an 8MP front shooter with f / 2.0 aperture.

The Realme camera app remains unchanged and looks similar to what we saw in the Realme 5s. There are quick switches to switch to HDR, flash and wide-angle cameras. There are also night and portrait modes. Realme 5i locks focus quickly when shooting. When using the Realme 5i during the day, the lighting is sufficiently darkened and the photo has an appropriate dynamic range. The photos we took had a high level of detail that could be seen even after zooming in. Wide angle cameras provide a wider field of view, but the level of detail is not the same. The edges of the frames look a little tucked up. The Realme 5i delivers great detail when shooting close-ups, and the result is perfect for low-cost smartphones.

The macro camera lets you get very close to a subject and manages to produce sharp shots. However, the macro camera resolution is just 2 megapixels. While shooting portraits, we noticed that the Realme 5i does not offer the option to set the level of blur before taking a shot. Portrait shots were slightly hazy, and portraits shot against the light were not metered correctly.

Camera performance in low light is below average and photos are not visible at all. I used the Nightscape mode to get a brighter, but still very grainy image. Selfies taken with the Realme 5i are decorated by default and can be turned off. The picture is quite average and the background is too bright when shooting outdoors. The Realme 5i also has a portrait mode for selfies, which is surprisingly good, but edge detection falls short. 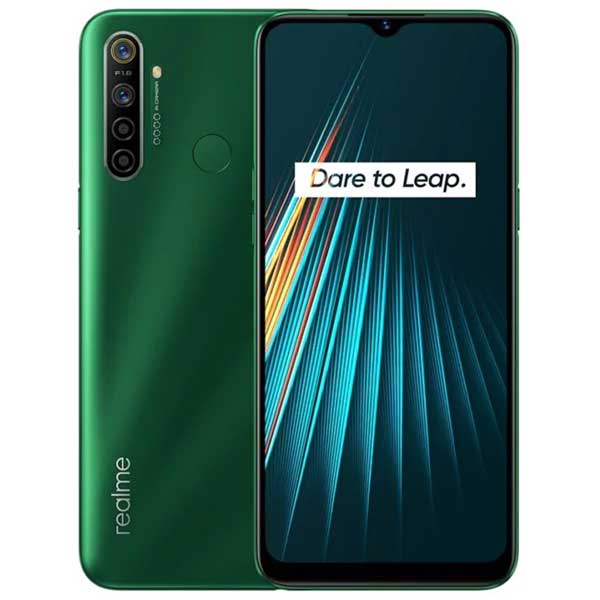 Video Performance -
Video recording maxes out at 4K for the primary camera, but stabilisation is only available when shooting at 1080p. Videos shot in the day were well stabilised. The wide-angle-camera also has stabilisation, but a mild shimmer effect is visible in the output. In low-light, the output was quite grainy and we found the stabilisation to be below average.

Performance: Just about average-
The Realme 5i is a good smartphone with the right hardware. The Snapdragon 665 SoC delivers results effortlessly. With 4GB of RAM, this device can multitask without leaving background apps. We found the screen to have a good viewing angle and bright outdoor lighting. The speaker at the bottom is quite noisy, which helps display content. There is also a face recognition function and a fingerprint scanner that can be used to quickly unlock the smartphone.

We use standard metrics to measure the performance of the Realme 5i. In AnTuTu v8, he scored 1.70 480 points. In the Geekbench 5 single-core and multi-core tests, the device passed 309 and 1345 points, respectively. For the graphics test, the GFXBench Realme 5i was able to record 12fps in a car chase and 49fps in a T-scene recording. -Rex. We played PUBG Mobile on a 5i and the phone was set to Low, which was set to Good by default and the frame rate was set to Medium. In this setting, you can play without problems. I played the game for about 20 minutes and found that the phone hardly heats up.

Battery life: Big life bt no fast charging -
The Realme 5 and Realme 5s offer excellent battery life, and the Realme 5i isn't any different. IT has 5,000 mah big battery.With our usage which consisted of an active WhatsApp account, using Google Maps and taking camera samples, the Realme 5i easily lasted over a day and a half. In our HD video loop test, the Realme 5i lasted as long as the Realme 5s. Charging the smartphone with the included 10W charger took us over two hours. Fast charging is not supported.

Verdict-
The Realme 5i is a great choice if you are looking for a mobile phone for everyday use and don't care too much about all its specs, such as a medium format camera or slow charging. The Realme 5i will do its job and for many, that will be enough. 5i is very popular, thanks to the Snapdragon 665 SoC and 4GB of RAM. The 5,000mAh battery also provides excellent battery life. However, the camera performance lags a bit.

The main goal of the Realme 5i is to provide powerful hardware at a lower price point, and to some extent this is possible. If you mainly want a gaming phone, the Realme 5i will delight you. But when you're ready to boost your budget, Realme 5s and Redmi Note 8 are better for everyone.

Realme 5i is the same as Realme 5s and all problems arise here because there is no Type-C port without fast charging, so I recommend buying Redmi Note 8. Xiaomi phones have a stylish look, port type-C and fast charging. The Vivo U20 is another alternative if you are willing to buy over this money. The Vivo U20 comes with fast charging support, a 5,000mAh battery and a sleek premium display.

Walton has recently launched its new low-budget smartphone. The name of the phone is Walton Primo GH9 which is priced at around BDT 6,799. The phone was launched in Bangladesh in September, 2020. The phone is now available for sale in the market. It is available in one variant which is 2gb ram/16gb rom. I have already used the phone for a few days as I have it in my hand. And today I will talk to you about the details of the p ... read
OnePlus Clover Review

OnePlus is reported to be working on an entry-level phone and this handset is largely rumored to be codenamed ‘Clover'. This alleged OnePlus Clover was recently tipped to be powered by the Snapdragon 460 SoC and now a new OnePlus phone possibly running on the same processor has been spotted on Geekbench. This new handset comes with the model number BE2012 and it is listed to also pack 4GB of RAM. OnePlus strategy so far has ... read
Realme 5i Review

It is reported that the Chinese smartphone makers Xiaomi and Real Mi are competing to beat each other in the market. Both manufacturers very quickly released their new smartphones last year.Keeping your phone up to date is very important, especially in a highly competitive market, where the middle class sees new smartphones every week. However, it looks like some brands have other plans. The Realme 5i, is a continuation of the compa ... read

In April, Samsung announced updates to its Galaxy A series, its family of budget phones that are poised to compete against Apple's latest iPhone SE for 2020. While some models have new features like 5G, all of them are at mid-range budget and have headphone jacks.One of the new phones, the Galaxy A51, is a sequel to 2019's Galaxy A50. This year the Galaxy A series has become more diverse. Samsung has released the Ga ... read